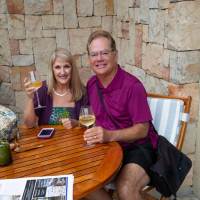 We began our journey on April 25, 2016, when we booked a long-time dream of a European River cruise. It seemed forever in the distance. We booked our own air on American Airlines at a cost. Steve used points to pay for the Waldorf Astoria Amsterdam and the Hilton Budapest and the Conrad hotel in London. All excursions were included in the cruise at no additional cost… as was all liquor and transfers from the airports.
The reality finally came true, when we boarded the first leg of our flight for Dallas at 11:30 on September 16. We left Dallas at 4 pm for the 9.5-hour flight to Amsterdam. Immigration was very crowded and it took an hour to get through. We looked for our driver where Tauck told us to find him but we could not find our driver. We did find a tauck representative who did not have our name on his list. He made a phone call and a few minutes a later our driver found us. He said we came in the wrong gate... well I can't answer that other than to say we took the exit immigration told us to take.
He helped us with our bags and drove us to the Waldorf. We were greeted by the bellmen. We checked in but our room was not ready so we walked to the Van Gogh museum where we had pre-purchased tickets on line. We had lunch at the Rijksmuseum next door. Then we went to the Van Gogh museum. The museum is lovely… but we were so very tired…I am not sure we were able to really appreciate the artwork we saw. While there we received a text that our room was ready. We walked back to the Waldorf and reception took us to room 204…which had a beautiful view of the garden. The room was beautiful. The bathroom was simply luxurious. The luggage was already in the room. We decided to take a nap and then afterward went to happy hour. We went to dinner at the Goldfinch Brasserie. We got the three-course dinner with the wine pairing. We had sturgeon Shrimp, Japanese ribs, and sweet waldorf salad. The meal and service were excellent. We came back to the room and took a hot bath and went to bed.

September 18 2017 On Monday morning, we had breakfast at the hotel. We had eggs benedict. Then we walked to the red-light district and the Dam district and then to the Anne Frank House where we had pre-purchased tickets online. We walked back to the Waldorf and gathered our bags. The waldorf arranged for a taxi for 50 euros. I went to the desk and checked in…which consisted of telling her our name. They checked no passport…no paper work…nothing. They told us which room... 211 and two men did help us bring the luggage to the room... thank God …because steve was furious. This is the smallest room we have ever had on a cruise. We booked a room with a king bed and a French balcony. There was a small desk and two chairs. You could not walk between the desk and the bed if someone was sitting in the chair. We unpacked and I went to the desk to ask for more hangers. They did give us more. We went to the bar and got a glass of wine and ate some nachos. We went to the desk to ask how to hook to the internet. They said to bring all of our devices to them. So, we did. We hooked to the internet which was excruciatingly slow…but at least we did have connections. When we arrived, there were very few passengers on board but at 4:00 they all seemed to arrive. There is nothing fancy about this ship. If this is a premier river cruise line I would hate to see a cheaper one.
For dinner, we had Dutch salad and Dutch soup and perch and Dutch apple pie for dinner. We retired to our room…exhausted and disappointed.

September 19 2017 On Tuesday, we had the breakfast buffet on the ship, then went to the Rijksmuseum. We then had a private luncheon cruise on a canal boat. We had Avocado salad, chicken fillet and Dutch apple pie. It was very lovely. We then had a 2-hour bus ride to catch up to our ship in Nijmengen. We had dinner and went to the lounge.

September 20 2017 On Wednesday, we got to sleep in and then went to breakfast at 9. We docked about 11:30 in Cologne Germany. We toured the beautiful church and the roman museum. Almost all of the city was destroyed by bombs…but they did not destroy the church. We had a formal cocktail hour and then a beautiful formal dinner. We had lobster and I had extra foie gras.

September 21 2017 On Thursday, we traveled the Rhine and saw many beautiful castles and vineyards on our way to Rudesheim Germany. We had a very lovely lunch at a place called rudesheimer Schloss. We had Riesling, salad, German potato soup, wiener Schnitzler, apple strudel and rudescheim cafe...with brandy. We toured the Siegfried’s Mechanisches Musikkaninett...and rode on a cable car to the top of the mountain to see the niederwald monument and then back down again. When we got on board, I decided to talk to Carlos the cruise director about the glitch in our arrival and transport from the airport and the fact that no one helped us with our luggage upon our arrival to the ship. He said so the driver went to the wrong gate….and did you expect people to stand in the rain to help you on board? I regretted speaking to him…because he sealed the dissatisfaction and disappointment. You simply cannot undo that kind of impression. All we wanted was an apology and a promise that it would be addressed. We felt that because we did not stay in the Tauck recommended hotel…we were punished. Had we stayed in the “right” hotel…we would have arrived on the bus with the rest of the group and everything would have been properly taken care of. Point taken…. lesson learned…Tauck lost a customer.
Friday September 22 2017 We traveled from the Rhine to the Main River overnight…we went through many locks all night…and have continued to go through locks today and we went up on deck to watch how the process works. A glass blower Hans Ittig came aboard from the town of Wertheim…which we go by but do not stop at…and he gave a glass blowing demonstration and had items to sell. I bought a masterpiece horse head, a ship in a bottle, engraved shot glasses and an ornament. We took pictures of the room. Autumn is falling in Germany…and the hills are beginning to have many colors.
Saturday September 23 Today we went to Würzburg and then took a bus to Rothenberg. We visited St. Jacob’s church. We had lunch at Ratsstube Restaurant bakery. I had a ham and cheese croissant and steve had quiche. Then we went to a wine tasting at Staatliche Hofkeller in the cellar of the Wurzburg Residenz. Following dinner was disco night in the lounge.