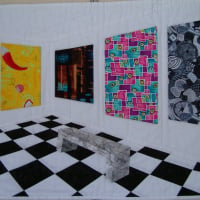 Claudia Sails
October 2015 in The Rhine and Moselle
This is less a review of the cruise and more a bit of fill in the blanks and lessons learned. If you want details about the itinerary, sights, etc I’m happy to answer any questions. The 2016 itinerary is slightly different from the 2015 so some points I could make now are moot.

Time of year. We specifically chose Oct hoping for Indian summer weather and great fall colors. We got the later but didn’t get the former until the last few days. Temperatures generally topped out at 52 with cloudy/misty skies then warmed to the low 60s with afternoon clear skies the last few days. We certainly appreciated it anytime the sun appeared. The fall colors were amazing though – especially the Moselle portion of the cruise and the drive to Lucerne on the last day. If you plan a Rhine cruise, definitely include the Moselle.

Room category. We picked a Cat 4 room –that’s one of 2 triangular shaped rooms at the front of the Ruby Deck. The room itself – size, layout, storage was great. However, it got a lot more lobby noise than we had expected – some from the crew going about their work and some from late night revelers. If you are a light sleeper do not book this room. If you’ve already booked it, pack ear plugs (or join the revelers…). It also does not have its own coffee maker unlike most other cabins on the ship. We packed plastic insulated mugs and the few times we wanted early coffee took turns walking to the bistro to fill our cups and snag a couple of croissants.

Pace. This cruise had a more leisurely pace than our French Waterways cruise. Again, we planned this deliberately. The busiest days of the cruise for southbound are toward the end so you get a chance to recover from jet lag at the beginning with some afternoon and morning cruising. There was also more bus time. Not ideal, but Tauck can only do so much with geography. Except for Baden Baden, we were generally tied up at a nice location where you could walk into town, get some exercise etc. Again the Moselle really shined.

Crew. The Inspire’s Scylla crew was great. We’d had a nice time on the Swiss Emerald last year but the Inspire’s crew is better. Personable, courteous, funny, outstanding service. Not a single clinker in the lot. Do not miss the crew show.

Food. Overall the food was excellent and an effort was clearly made to include local items. We had great schnitzel, sausage, etc. I even twice had sauerkraut I liked – a food I have hated in the past. The only food items I was disappointed in were the ice cream or frozen desserts. High quality cream but not much flavor. Something billed as frozen Bailey’s tasted nothing like that particular drink. By contrast, the cookies were fantastic. These were always available in the bistro. Speaking of which, the new Arthurs is a definite improvement over the smaller bistros on the older Scylla ships. It has its own kitchen and a more extensive (though fixed) dinner menu. Worth taking a break from the main dining room for a change of pace.
Laundry. I had 2 pairs of cotton slacks laundered on the ship. The cost was 6 euros each. I placed them in the provided bag in the morning on the way out to tour and they were back by noon the next day hanging pressed in my room. Also I hand washed socks, undies, and lighter weight synthetic blend tops for my husband and myself. Generally they dried within a day, but heavier cotton or wool blends took 2. The shower has a pull out laundry line and there is no sink stopper. Before the trip I purchased a silicon one made by Oxo kitchen tools for under $10 that worked very well.

Hotels. We added 2 nights in Amsterdam at the Sofitel and 2 in Basel at the Swissotel. Both were very nice and in good locations. The staff at the Sofitel was the best we’ve experienced. You never passed an employee without them asking if you needed anything. We had inquired by email if our room would be ready for our 10AM arrival. Answer was they would guarantee it for 175 euro extra which needless to say we declined, however, upon check in our room was ready at no extra charge. The Swissotel is a bit different. More of a modern vibe located next to the Basel exhibition center. Hotel guests in Basel get free tram/bus pass – easy to get around the city.

Hotel breakfasts, transfers and TDs. The first morning at the Sofitel we were provided breakfast in the Bridges dining room and on the second when more Tauck guests were there, they moved us to a large conference room in another wing. The first day was better since hot items were cooked to order. The TDs were at the hotel from 9-12 and 2-3 on the first tour day. Extra luggage tags were available and luggage was picked up in our rooms at 10. Check out time was noon. You didn’t need to be present for the luggage pick up so you could get it ready, have breakfast, clear your bill at the hotel and go sight see until 3 when we were led by one of the TDs from the hotel to the coaches for transport to the ship. At the other end of the trip, about 30 of us stayed over in Basil. We had to be out of our staterooms and our baggage waiting outside them by 9am. At 9:30 we were taken in a coach to the Swissotel where we checked in. None of our rooms were ready that early but we took care of the preliminaries like passports, credit card imprints, etc and were given out tram passes. The concierge provided help like tram maps, city maps. Before leaving the ship, the cruise director provided details on our departure from the hotel – pick up time, when to have the baggage ready, etc. Breakfast at the Swissotel was the buffet provided in the hotel’s restaurant.

Inexpensive dining Amsterdam/Basel. Knowing how much we’d be eating on the ship we looked for more economical and less copious fare on our own. In Amsterdam I recommend 2 places. V&D is a department store chain that has self serve restaurants and takeout. One is located near the Munt tower on Kalverstrat – a fairly easy walk from the hotel. It had the BEST split pea and sausage soup. They also have a location on the 7th floor of the public library which is very close to where the ship is moored. The other recommendation is the Albert Hein stores which are everywhere. There’s a very nice one on Dam square close to several ATMs (and the Macdonalds and KFC – just for land marks). Great take out sandwiches, salads, fruit, drinks, etc. In Basel, we ate lunch and got take out at a Migros dept store. One is about 2-3 blocks from the hotel on Clarastrasse. It’s a quick walk or tram ride. The restaurant is on the 4th floor (take the glass elevator), groceries on the -1, and takeout on the 0 level. Be prepared, Swiss prices are very high.

Currency. For most of the trip the Euro is the currency. In Switzerland it’s the Swiss Franc. Some Swiss merchants will take Euro bills but give you back Swiss Francs as change. Generally they wouldn’t take Euro coins. The Swissotel will convert money at the front desk and it was a fairly decent rate. We used this for some of our remaining Euros. It was also easy to pay with our credit cards – chipped but not pinned.

Last but not least - Apparel. Nice, casual and comfortable. Generally very few men wore sport or suit jackets to dinner. Even at the welcome and farewell dinner maybe ¼ of the men did so. Most wore a variation of long sleeve shirt, pullover sweater and/or tie. Even fewer women wore dresses or skirts. Lots of black dress slacks paired with nice sweaters or tops sporting a bit of bling, lace or a scarf. A sweater or wrap was certainly needed in the evening if you were sitting next to the outer wall/windows in the lounge or dining room. I packed assuming cool weather and had a knit hat, gloves and warm scarf. Those who didn’t had to do some shopping. I also took my heavy nylon jacket that is made to go over bulky sweaters and has lots of pockets. I seldom took a purse on tours as all valuables went in the inner pockets and I even had one for the vox transmitter. I find the neck strap on those can get tiring so it was a relief.
Summary. In spite of the weather, we had a great cruise, made some new friends, and saw some interesting sites. I highly recommend this cruise.