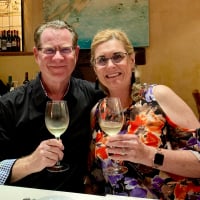 Hopkinstx
January 2019 in Classic Italy, Small Groups
We are getting excited for our upcoming trip in May. I have read the existing Classic Italy topics and have gleaned a lot of good info and tips. Would love to hear more thoughts from recent travelers. We are signed up for the new Capri tour and are extended 2 days on both ends of their trip. I know ATM’s are prevalent and we can use them as needed, but still deciding how many euros to initially take with us. Any lessons learned from others? Also, will be traveling business class from Houston on Air Canada and Brussels Air to Naples. Anyone have experience with those carriers? Looking forward to a fantastic trip and making new friends!
0 · Share on FacebookShare on Twitter