Rather long report. There is a character limit.

May 25 - June 3 tour, the start of winter. We picked this date hoping for the best chance of good weather and temps in Livingstgone, on safari in Botswana, and in Cape Town and water flow over the falls. For the most part it worked.

Temps- Instead of trying to figure out what you need to wear by using Tauck's weather and average temps, see the historical graphs at https://weatherspark.com This is by far the best website I have ever found for best-guess as to weather- temps, wind, humidity, etc. There are WIDE swings in temps between the morning, midday, and night! Layering is essential. I recommend a fleece or better yet hoodie or fleece with a hood. Blankets and or fleece-lined ponchos are carried by most (all?) the safari vehicles and believe me we needed and used them at the start of morning and during nighttime game drives when we went!!!! (note: it was at the start of their winter.) I don 't think temps ever dropped into the 40's (though likely in June and July), but certainly into the 50's and with wind from the moving vehicle, it got downright chilly! Many of the women also wore gloves. By about 10 am we started shedding layers. The temps maxed out between 2:00 - 3:00 pm.

Flights- We booked flights ourselves and flew Delta non-stop from ATL to Jo'burg. We arrived at 5:30 pm, too late for connecting flights to Livingstone, so we claimed our bags which weren't checked thru, and had a planned overnight stay at the InterContinental which is only 75' from the terminal doors, in a well lighted area! There are other (and cheaper) airport hotel options, one, the Protea, is actually on the air side so you don't have to retrieve and recheck bags if they are checked thru (I didn't like the reviews). We had a good night's sleep so were refreshed and ready for activities the next day (we arrived two days early). Our SAA flight to LVI was scheduled to depart Jo'burg at 10:40 am but left a little late. The 11:00 am BA/Comair flight departed shortly after us.

All on-tour flights except Maun to Cape Town were on Cessna Grand Caravans.

Johannesburg Airport. See my comments in another thread about issues with Jo'burg airport. We had an "official?" "authorized?" helper" and no problems

Visa and immigration. Our flight arrived just a few min. before the BA flight. As planned, we got in the KAZA visa (right) side of the immigration/visa desk. Almost everyone else went to regular Zambia visa line on left (locals were in the center line) so we were second in line. The KAZA multi-entry visa is good for 30 days and for multiple entries to both Zambia and Zimbabwe- they are the same price ($50) so why get a single entry Zambia-only visa? We got through immigration in less than 10 min! At home I completed the online form for the KAZA visa so I had all the info available- I didn't need it, they didn't ask for any of it except possibly when we were leaving- really a quick, casual affair. (FYI, it was only at Atlanta where they checked to make sure we had the required number of visa pages for South Africa!!) After picking up our bags we were met in the main hall by the Tauck driver, but since the BA flight had also just arrived he waited for our two friends who were on that flight. The van took the four of us to the river where we boarded a boat that took us to the Royal Livingstone- a mini waterborne game drive. Our bags continued with the van to the hotel- you can also choose to skip the boar ride and go to directly to the hotel in the van with your bags- why???? We arrived at the hotel dock a little before 2:00 but for some reason the staff had a hard time finding our reservation so it took 20 - 30 min. to get checked in and get to our room! There was still plenty of time to catch the shuttle to the Batoka Airstrip for our micro-light flight above the falls and up river. I booked (and paid for!) ir months earlier through Bushtracks- the hotel endorsed on-site booking agent.

Meds- we both took an emergency supply of an antibiotic (CIPRO) with us but did not need it. This time both of us had minor side effects from Malarone and stopped taking it (temps were too low for mosquitoes anyway), so if we go back to a malaria risk area we might see about taking Doxycycline. My wife had no side-effects from taking that on K&T.

The Royal Livingstone was very nice, the grounds, which are actually within the confines of Mosi-oa-Tunya National Park, were beautiful. 2 - 3 times a day half a dozen or so zebra come to visit ("Cue the zebra"). Though not in the same numbers, impala, baboons and to an even lesser degree, giraffe will also visit. In the morning, signs of nighttime animal visits were everywhere on the lawn. Note: the animals, though accustomed to humans, are wild!!

Grounds maintenance or other staff may offer to show you a giraffe or baby giraffe, etc. This may or may not happen, and is probably not sanctioned by the hotel, they are just seeking extra money hoping for a tip.

Other restaurants. There are two more casual and less expensive restaurants at the Avani (Teddy's and the Poolside Bar and Grill. We ate a dinner at Teddy's and a lunch at poolside. Since the Avani is part of same hotel group we were able to charge the meals to our Royal Livingstone room account.

There really is not much else to do at the Royal Livingstone other than the spa, eat, drink sundowers on their dock and visit the falls park. Bushtracks can book almost any off-site activity available in the area (helicopter & microlight flights, bungee jump, zipline, dinner cruise, animal encounters, etc., etc.) . If you email the hotel they will email you back a large PDF listing available activities.

Mosi-oa-tunya ("the smoke that thunders") National Park. You can follow a path from RL to the neighboring Avani, log out at the back gatehouse to the hotel grounds, and enter a parking lot across from the entrance to Mosi-oa-Tunya park where you can gain access with just your a hotel pass. You'll also need your pass or room key card to re-enter the hotel grounds. We did that and made a brief trip to the Zambia side of the falls- we did not go all the way to the "Knife Edged Bridge" where the spray was heaviest. You need heavy duty rain gear or ponchos for that. They can be rented in the park but decided not to do that since we were going there with Tauck in two days.

We exited the park, easily navigated the Zambia border station and walked onto the Victoria Falls bridge for some photos (the welcome dinner train stops there also for photos, but by that time daylight is waning) . We continued across the bridge, through the Zimbabwe border station and to the entrance of Zimbabwe's Victoria Falls Park. I don't remember the distance, but you can check it on Google Maps. We had planned to eat lunch at the Rain Forest Café, but learned it was located inside the park so requires a separate entry fee. A "vote was taken" - we headed back to Zambia.

The ultralight flights were a blast. No cameras are allowed on the flight so we added the photo package (wing-mounted GoPro aimed at the cockpit) but it only takes still photos, tons of still photos- one every 10 sec. or so, but is really not worth the extra expense for one or two set shots- if two are flying only get one photo package. 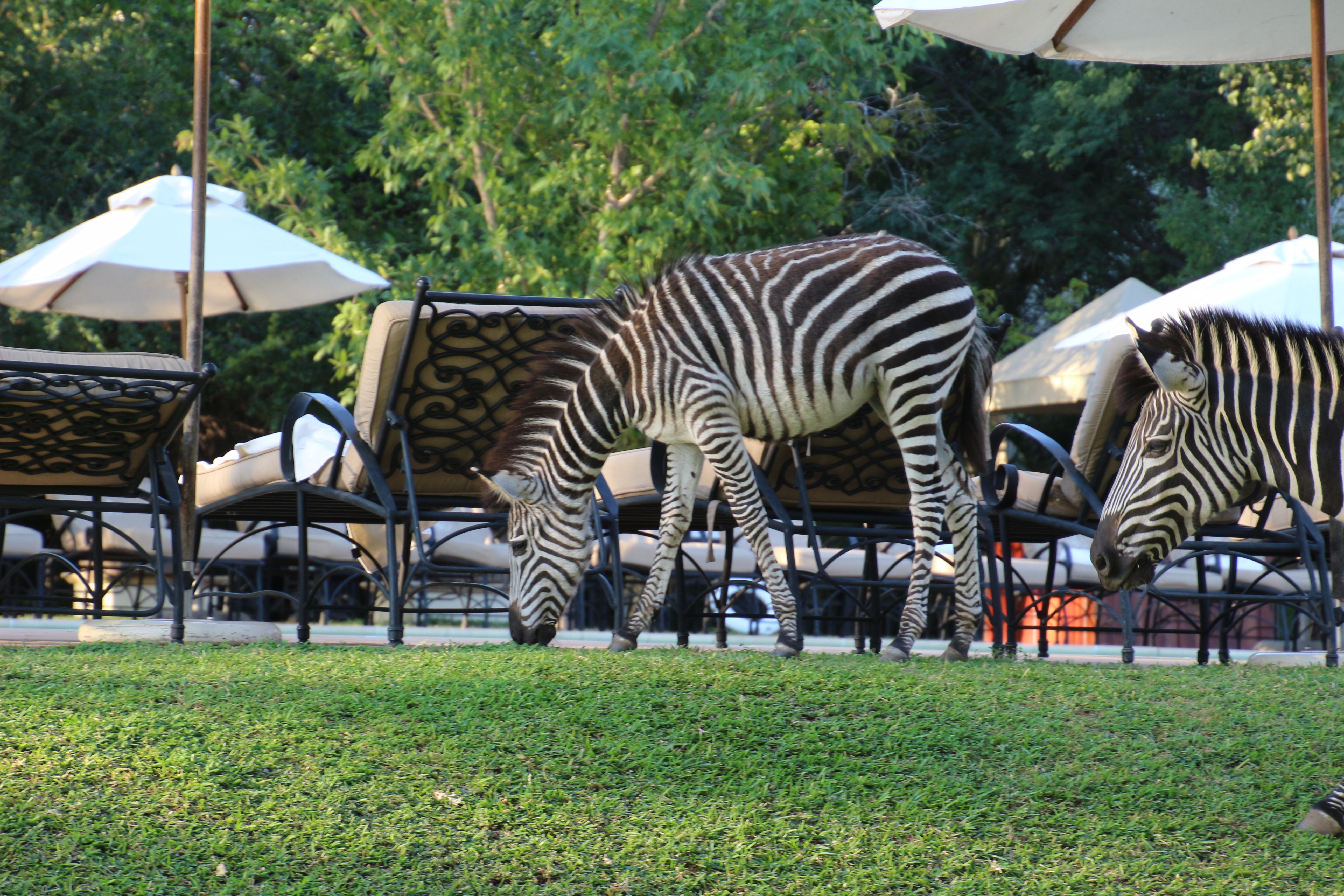 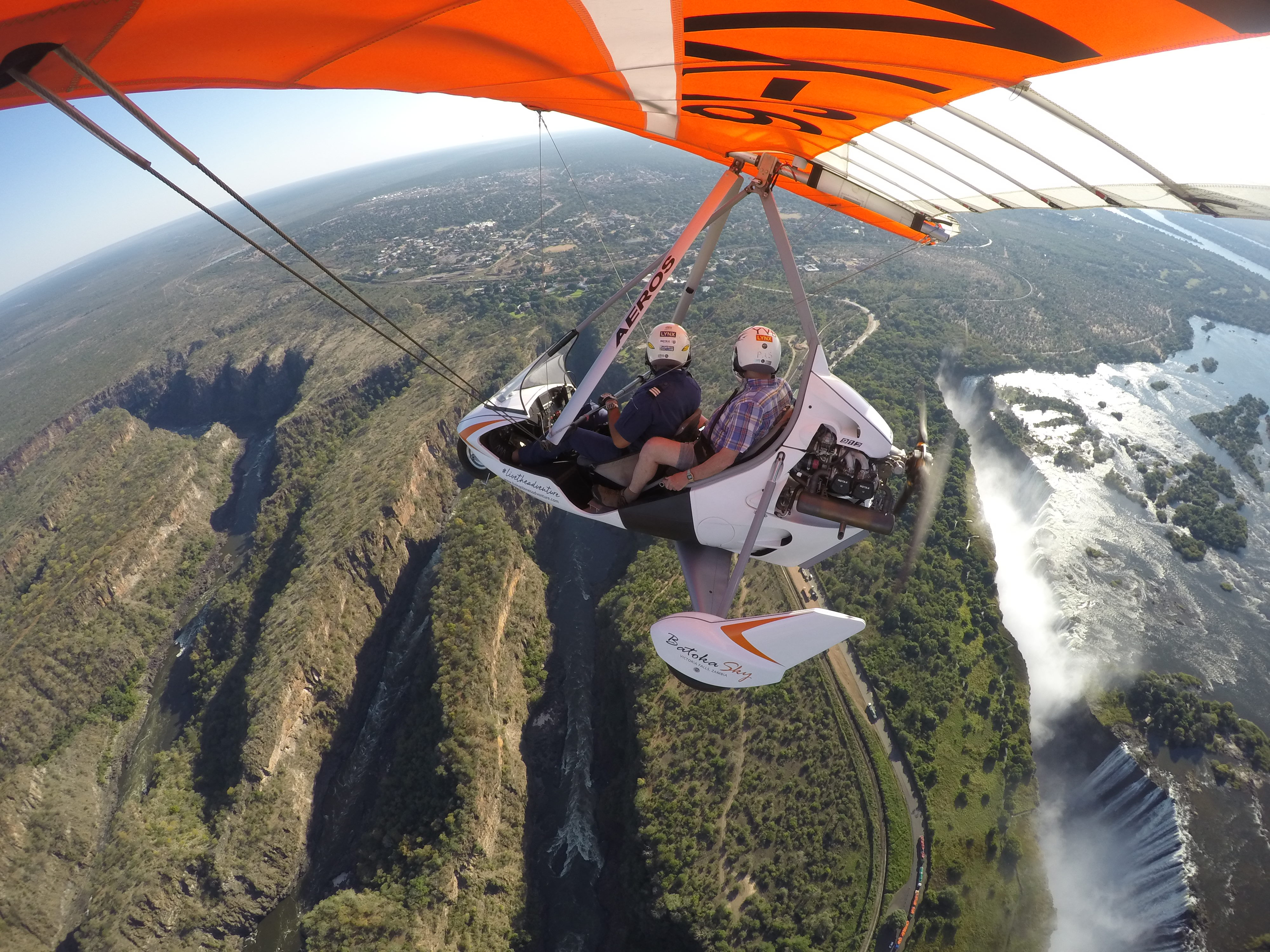 The line of white buildings on the right shore is the Royal Livingstone Hotel. 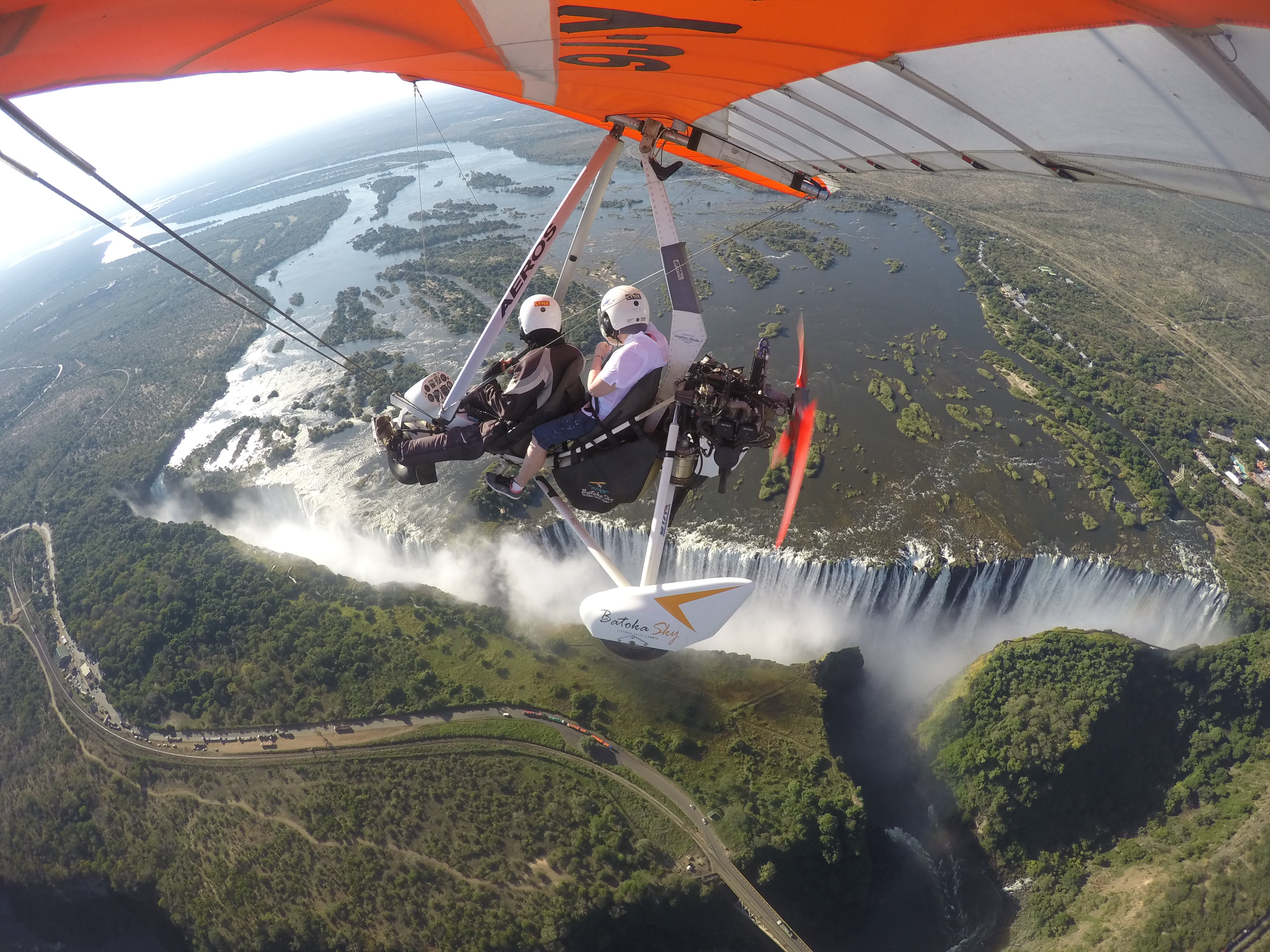 Note the line of elephants (near the propeller) crossing the river and approaching an island just a bit upstream from the falls. 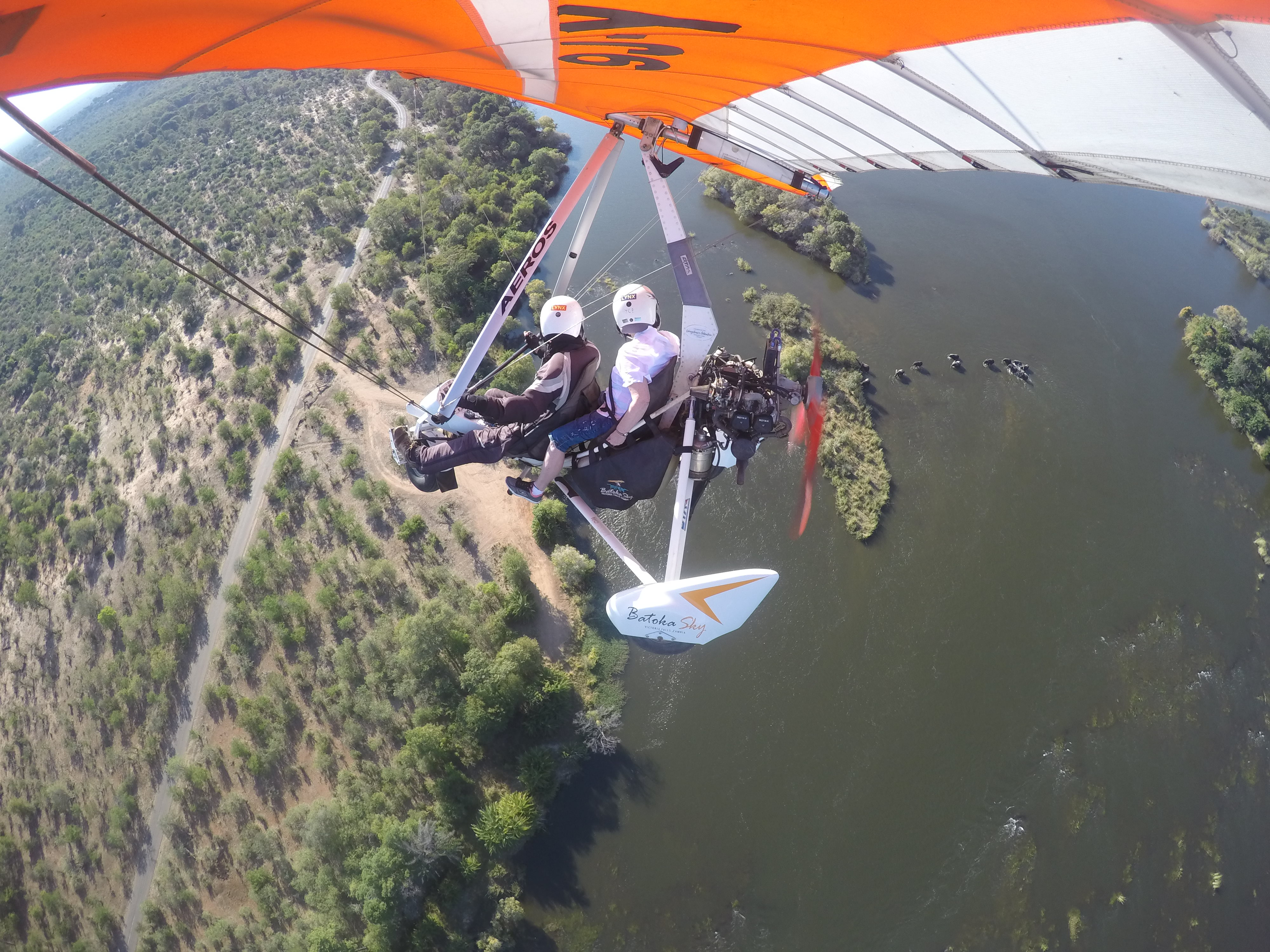