"Been There" Virtual Travel Quiz? Round #98

See Round #20 for info about and rules for the contest.

Round #86 won by Portolan
Submitted by AlanS. Peruvian Paso horses during a performance at Hacienda Mamacona in Lurin, Peru. Known for their extremely smooth ride which is a result of a unique four step gait. They inherited this gait from European predecessors, strict breeding and training, though some claim it resulted from walking on the hot sands of coastal Peru. During the performance the horses wore ribbons to signify their prior show successes.

Round #87 won by BobHamburger with assist from TravelGuy.
Submitted by Sandman. A ski jumper airborne over the Bergisel with the town of Innsbruck, Austria, site of the ’64 and ’76 Olympics, in the background. Photo taken on Alpine Adventure, a Tauck Bridges Tour.

Round #88 won by AlanS with assist from Portolan
Submitted by connorlaker. Photo of Connor, his bride, and Mount Kilimanjaro, taken from Observation Hill in Amboseli National Park, Kenya on Kenya & Tanzania: A Classic Safari.

Round #89 won by AlanS
Submitted by KathyM. This picture of the Rainbow Bridge National Monument in southern Utah, Glen Canyon National Recreation Area was taken on the plan ride from the Lake Powell area during the Canyonlands trip. Rainbow Bridge is only accessible by boat on Lake Powell or by land over a 14+ mile trail from the Navajo Nation.

Round #90 won by Kathy M
Submitted by JohnS. A view of Cortina d’Ampezzo in the Dolomite Mountains of northern Italy. Photo taken from the Cristallo hotel on Ultimate Alps & Dolomites tour.

Round #91 won by BKMD
Submitted by British. A view of the Panama City, Panama, waterfront, taken looking south, from the Hilton Panama during The Panama Canal & Costa Rica small ship cruise. The Interamerican (Panamerican) Highway (Rte 1) just below, follows the coastline here. Panama Bay, the approach to the canal and Bridge of Americas are (not visible) off in the distance in the center of the second photo near the distant islands. Google Maps, satellite view has been updated to show the new Cocoli locks. Check it out
Factoid- when you transit the Panama Canal from Pacific to Atlantic, you travel in a northwest direction. Likewise when transiting the Canal from the Atlantic to Pacific you travel in a southeast direction.

Round #92 won by Portolan
Submitted by BKMD. Views of the Mediterranean from a Tel Aviv, Israel, hotel (next to the Dan Panorama Hotel) and sweet treats at the Carmel Market.

Round #93 won by TravelGuy
Submitted by Smiling Sam. A view of the cross on Mount Srd near Fort Imperial and the Adreatic Sea beyond in Dubrovnik, Croatia. 2016 small ship cruise, Venice and the Dalmatian Coast.

Round #94 won by SueMS
Submitted TravelGuy. The throne room (with thrones for King Kalākaua and his wife Queen Kapiʻolani) and the grand staircase at the Iolani Palace in Hololulu, Oahu, Hawaii, USA.

Round #95 won by Smiling Sam
Submitted by connorlaker. Photo of a shelter at the base of Sakurajima Volcano, the most active volcano in Japan, (school children are required to wear hardhats walking to and from school). The second photo is of a footbath using water from a geothermal spring. Cruising the Land of the Rising Sun.

Round #96 won by Smiling Sam
Submitted by SueMS. These are mama and baby Lipizzaner horses and were on display next to the Spanish Riding School in Vienna, Austria. (tour?)

Round #97 won by BKMD with assist from JohnS
Submitted by Kathy M. People riding the motorized walkway that provided sliders an easy trip back to the top of the glacier sliding hill on Mt. Titlis in Switzerland. Tour?

Round #98 is officially open. Submit your photo in a reply [Leave a Comment] to this announcement.

Following the same theme, I'll take this one: 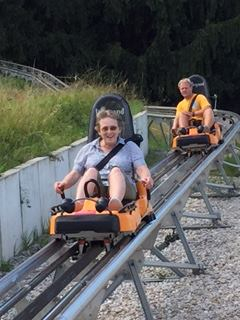 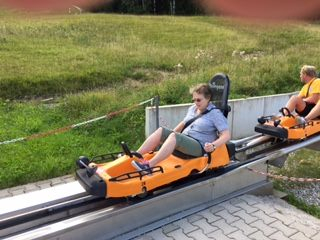