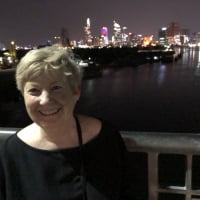 A friend whom I met on my Egypt tour (not with Tauck, because Tauck wasn't going there at the time), who loves all things Egypt, sent me a link to this article about the upcoming Golden Parade, which will move mummies from the current museum to the GEM on April 3. I thought of AlanS when I saw it. I wish I knew how to include a hyperlink in this message, but if you retype the link, it will get you there:

If anyone finds out whether the parade will be shown on line, please post the information,