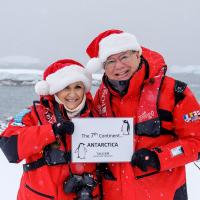 Prior to the trip, we had to have a physical and paperwork completed by our doctor. We also had to have proof of medical insurance that covers covid. We had to be vaccinated against covid and we had to provide a negative PCR covid test taken less than 72 hours upon arrival in Buenos Aires. So, we scheduled a PCR covid test at Arcpoint Labs at a cost of $220 apiece. We got the test on Saturday December 5 at 3:30 pm and we had the results one hour later.

We booked premium economy with American Airlines points (179,000) and flew from STL to Dallas at 3:44 pm on December 5. We had two bags, forty-eight pounds each. Steve had his camera bag; fifteen pounds and I had a carry on seventeen pounds. Steve had the waterproof backpack, and I had a tote bag. We had time to kill so we went to Chilis for some nachos and wine. Our flight let on time.
We arrived in Dallas and went to the Centurion club and had a glass of wine. We went to the gate to wait for our 12:30 am flight. Steve walked over to McDonald’s to buy a soda and did not realize some of his cards fell out of his wallet. When he sat down and pulled out his wallets the cards were missing. For about an hour he fretted…until his name was called to come to the American airlines desk. Someone found the cards and turned them in. We then boarded the flight for Buenos Aires Argentina and flew all night. We breezed through immigration and customs and the Tauck guide was waiting for us. She was waiting on seven people…five of us got there together but there were two who we waited on for an hour. We drove to the Hilton and quickly checked in at 2:45 however the room was not ready…so we sat at a table in the lobby and filled out the Tauck paperwork. We got our room about 3:20…947. The room is perfectly adequate...it could use a little refresh bit it is clean and well appointed. We freshened up and took a walk and took a few pictures. We ran into Ken and Ray and had a glass of wine in the lobby bar. We went to Cabana las Lila’s for dinner. We all got the rib eye steak.

Tuesday Dec 7…we got up this morning and had breakfast in the lobby restaurant, El Farro. We had to go to the fifth floor to be tested for covid from 10:30 to 1:45. They tested both nostrils and our throat. The tour actually began at 1:50. We were divided into three groups…. blue, red, and yellow. Our tour guides are Dale, Rob, and Stacie. We are in the blue group and today our guide was Dale. She taped our names above the seats we were to sit in on the bus and handed out water. We felt very safe walking around and everyone has been particularly good to wear masks. We did NOT get to go to Evita’s grave because of construction in the cemetery. I was incredibly sad about that. Argentina is a beautiful vibrant city…though there is a lot of traffic. We had a champagne toast with our 76 Tauck people before going to dinner and attending the Tango show ...WHICH WAS AMAZING!!! Our evening ended about 9:15. This was a wonderful day.

Wednesday Dec 8, we got up at 7 to have breakfast. We began our tour today at 9:00. We visited the Southern Neighborhoods. We had lunch in San Telmo. We saw the changing of the guards at the Mausoleum of General St. Martin in the Metropolitan cathedral. Our bags have to be out tonight at 9:00 for our 5:15 bus ride to the airport to fly to Ushuaia.

Thursday Dec. 9, we got up at 4:00. We had a light breakfast at 4:30 and boarded the bus at 5:15 am. We drove to the airport and checked in. We found out that we all tested negative for covid and now we needed an exit form for Argentina. So, after we all checked in, we filled out the proper paperwork. Our flight left at 9. We got to Ushuaia at 12:30. We collected our bags and boarded the bus for lunch at the albatross. We boarded the ship at 3:30. They changed our room to 431. It is a nice room… small but adequate. We had a welcome orientation and lifeboat drill at 4:45. We did not set sail through the beagle channel until 7:30 because Argentina was still waiting on the paperwork. We had dinner at le Coromandel at 8:15. There are 76 Tauck passengers and 122 total passengers with a staff of 158. There are two restaurants…le Coromandel and Le Rodrigues. There are two bars, the Main lounge, and the observation lounge.

Friday Dec 10, the drake passage is rough. I woke up at 3:00 feeling ill. There was a lecture at 9:30 of the itinerary but I did not feel well enough to attend. We got our parkas at 11:45 today. They told us to wear them like a badge of honor.... I am certain we will. We went to the penguin lecture at 3:00 and midway through, I found a new purpose for the face mask...We ran to our room which is just down the hall from the theater...I did not make it, but the mask worked well. Steve put me to bed and got me a cookie and some seven up. I feared this would happen...I have not been seasick in 20 years. We ordered room service for dinner.
Our tv was working but we had no sound. Our room steward said there was a plug that was disconnected. He fixed it. The internet is...difficult. We are allowed two devices and when not in use we must make sure they are turned off. The captain strongly suggested we turn our phones to airplane mode and make no phone calls because it is expensive.
Concerning electricity. We carry an extension cord with three outlets and another three sockets plug we plug into that it gives us five extra plugs. We found it was more than enough to plug in our phones and laptop and we did not need an adapter in the hotel or on the ship because they do have at least one American plug.

Saturday Dec 11, we had a mandatory lecture at 9:30 and got our lifejackets. At 11:30, we took our outerwear to be vacuumed and got our boots. At 2:00, we had a lecture on tomorrows landing. We entered Dallman Bay at 4:00. We passed an iceberg with at least fifteen penguins on it. Then two minke whales were behind the iceberg and low and behold here came two humpbacks. The captain’s gala was at 7:00. Everyone dressed up.

Sunday Dec 12, we entered Neko Harbour. We were supposed to have two landings…but due to conditions…both were cancelled and instead we had zodiac tours. We did see lots of penguins and some whales. We went to Dorian Bay, and we could not land so we did another zodiac tour.

Monday Dec 13, we journeyed through the Lemaire channel. We made a landing and stepped on our seventh continent….an Island called port Charcot. We saw a leopard seal, a crabeater seal, gentoo penguins, chin strap penguins and Adelie penguins. We were supposed to land at Petermann Island, but the landing was replaced with a zodiac ride around an iceberg in Pleneau. We had a magnificent view of swimming penguins.
We had to fill out more paperwork for Argentina today

Tuesday Dec 14 We were supposed to go to Wihelmina Bay, but the conditions were bad, so We went to portal point, and did a continental landing. We saw gentoo penguins.

Wednesday Dec 15 …We entered into the Antarctic sound and then into the Weddell Sea. We did a landing on Devil’s Island. There were Thousands of Adelie penguins. We even saw baby chicks. We were supposed to do another landing in Brown Buff but due to conditions it was cancelled.

Thursday Dec 16, we filled out more paperwork for Argentina. We did a continental landing at View point. This is A new landing for Ponant. There were four seals… two crabeaters and two wedel seals, gentoo penguins, Antarctic terns nesting, and two Chilean cabins. We reentered the Antarctica Sound. We had the farewell gala dinner.

Friday Dec 17…We turned in our life jackets and boots this morning at 9:00. We were back in the drake passage and the seas were pretty rough.